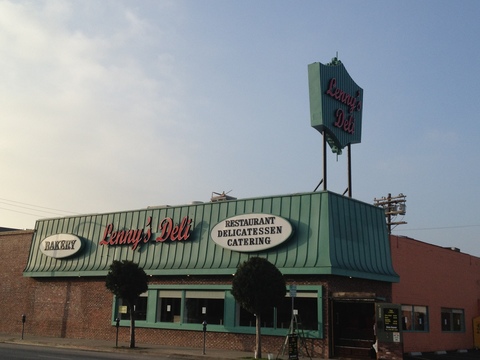 The West of Westwood Homeowners association report that a kick-off celebration will feature half-off prices all day tomorrow and some possible celebrity guests attending an 11:00 am ribbon cutting.

Owner Lenny Rosenberg, used to have a Lenny's Deli is the Palisades and also owns the 17th Street Cafe on Montana Ave in Santa Monica.

“I have great respect for the memory of Marvin Saul, who was the founder of Junior’s Deli” said Rosenberg in the West of Westwood  newsletter. “Lenny’s Deli will continue many of the traditions of a great, classic deli while bringing the concept into the 21st century. There will be many more health options and overall I have cut the prices while increasing our quality to create a much more customer friendly community environment.”

Was happy to try Lenny's (especially at 50% off).  It was decent and I will go back to try some of the rest of the menu.  It looked so much like Junior's and seemed to have some of the same people working there that it felt oddly familiar.  Tasted my first Montecristo sandwich.  That taste has stayed with me until today.