I first discovered Norms when I was a food server at Islands Restaurant on Pico (another post, coming soon) back in the early 90's. We used to lock up the restaurant and then head over to Norms, which as they say on the sign...never closes. 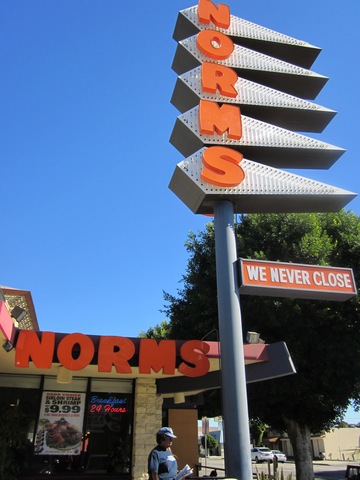 Now that I live right here in the neigborhood,  Norms has become our go to place for birthday celebrations. 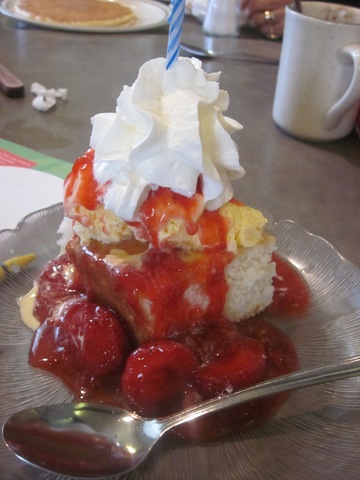 Where else can you eat cake for breakfast or breakast for dinner. My kids  can't get enough of the hot chocolate with whip cream and I love the generous portions of fresh avocado and fruit. You can't beat the prices either but beware, you may end up spending all the money you saved trying to win a stuffed animal from their hanging claw machine. It can be done but, as my kids know firsthand, it takes a lot of allowance.

Norms is more than family friendly. It is family-owned and still operated by the family of Norm Roybark, who opened the first Norms in 1949 at the corner of Sunset and Vine. It certainly has maintained it's old-fashioned charm but now offers modern conveniences like WiFi at all locations. They have an executive chef who has worked at some pretty fancy establishments before establishing himself at Norms. You can read about him on their website.

Also, be sure to check out the site's section on Googie architecture -  noteable for it's midcentury space age whimsy - which California coffee shops like Norms helped make famous. So famous, that the sawtooth sign that graces the outside of the Rancho Park restaurant and 11 other of the 17 Norms restaurants across Southern California has protected status as a Los Angeles icon, according to the Norm's website.

Eldon Davis, the architect who designed the Norm's on La Cienega in 1957 - now the oldest in operation - is credited with popularizing the Coffee Shop Modern style died just over one month ago at the age of 94. Here's a link to his obituary in the Los Angeles Times with more explanation about the Norm's Restaurants concept and it's place in history.

Rancho Park appreciates the legacy he and Norm Roybark left for us - 24 hours a day.