Published in 2009, this book offers lots of pictures and details of the Palms area which 100 years ago was defined as a large area halfway between LA and the beach.  If you are a local, 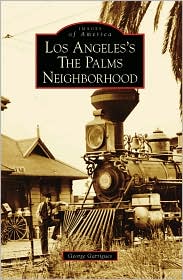 you will enjoy looking at the pictures and imagining what this area looked like years ago.  Wide open spaces, historic houses, two train lines, film studios, floods, factories making pasta and Tootsie Rolls...the book has a little bit of everything, just like our neighborhood.

The Westside neighborhood of Palms is the oldest suburb of Los Angeles. Founded in 1886 halfway between L.A. and the beach on a steam railroad line, Palms attracted wealthy Angelinos escaping the summer's downtown heat as well as Easterners seeking a new life in the natural home of the fig, olive, lemon, lime, apricot, and that class of fruit that brings the largest profit in the local market. Rancho Park and Mar Vista had yet to make it onto maps it was all The Palms. The school district stretched from the Santa Monica Mountains on the north toward Redondo Beach on the south. A lively social and business life sprang up, but gradually the metropolis enfolded Palms, which was annexed into Los Angeles in 1915. After World War II, subdivisions brought young families, the flatlands became a huge swath of apartments, and the barren hill area became the tree-shrouded Westside Village.

Author George Garrigues's first job after leaving UCLA in 1953 was as a technical copy editor in Palms. He later became a newspaper reporter and retired as a university journalism professor. He was one of the founders of the Palms Neighborhood Council and is a past president. He lives in Northwest Palms (Westside Village).

Comment by Overland Avenue on July 24, 2011 at 9:50am
Last sentence should read "After being moved TO the alley"!

Comment by Overland Avenue on July 24, 2011 at 9:45am
This is one of a series of books that at least as of last December, had a whole space at the Barnes & Nobles, Westside Pavilion.  The little book on Westwood covers the entire Janss Development and the Rancho Park area north of Pico, with wonderful photos of the area as it once was, from the beginning of the development of the tract through the present.  There's even a photo of the intersection of Overland Avenue and Pico Boulevard from the '50's, pre-May Company, when the former pony ride place at the southwest corner was turned into a Christmas Tree lot.  You can also see in that photo that the utility poles that are now located in the alleys north and south of Pico were previously located on Pico Boulevard.  After being moved from the alley, those pole holes were replaced with the ficus trees (whose roots ultimately created a sidewalk disaster!).