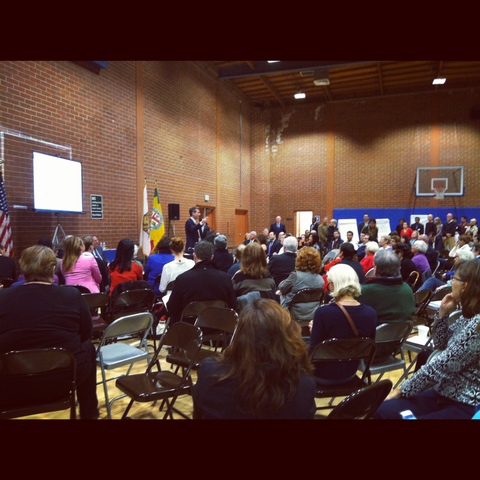 More than 200 people packed the Mar Vista Community Center last night for Mayor Garcetti's Budget Town Hall meeting. Daniel Tamm who represents Mayor Garcetti on the Westside (and was the Regional Field Director for Obama) introduced Deputy Mayor Rick Cole (who happens to be the former Mayor of Pasadena, and former City Manager of Ventura and Azusa) who gave a very informative presentation on the City of LA budget. Rick started out by saying, that there are two words to keep in mind when thinking about the City of LA budget:

1. The news is sobering
2. Solutions must be collaborative
Even though the State of CA may have surpluses and seems to have recovered, the City of LA is still facing a shortfall and is very much in recovery mode.
The $242 million shortfall actually represents only about 5% of the total City of LA budget.
He explained that the two biggest sources of city revenue are sales tax and property tax. Property taxes do not rise significantly and internet sales have impacted retail on the local level.
Two additional challenges that the City faces are:
1. Pension costs - The City will be paying to restore lost pension money during the Great Recession over the next 30 years
2. Salaries are going up this December after a 3 yr. freeze on raises for city workers

Another challenge is that the city has already made cuts so there is not a lot of fat left to trim. For example the city has already have reduced its workforce by 5,000 people
Key takeaway:
We have to hold the line for one more year and move towards "Performance Budgeting" that starts with the end goal in mind, and directs resources toward highest priorities
After Deputy Mayor Cole's presentation, the audience broke up into 16 groups. The groups were charged with defining what they think makes a great city and how we would measure progress.
After about 20 - 30 minutes Mayor Garcetti showed up and the groups reported out. Many of the concerns in the room were similar, most of us want a safe city, where businesses can thrive, and people can move around (by bike or mass transit) without having to fight so much traffic congestion. I was really impressed by the thoughts shared by all the groups, even though at the time, the process seemed a bit loud and chaotic.
Back at the podium, Mayor Garcetti emphasized that he is working to change the culture of LA and even before the budget is written he is asking all of us what we see for our city and how should it be measured?
His goals for the City of LA budget as as follows:
1. Align budget with the outcomes we want
2. Measure performance
3. Make results public
He said we didn't get it tough shape overnight, this is a marathon not a sprint, and it is going to take time for the city to recover financially. Mayor Garcetti said we must come together as a city to solve our problems.
He explained that currently, measuring progress is a challenge because all 36 departments of the City of LA have different tracking systems. However, the Mayor is working to get the entire city on one system and once this is done, it will be easier to track and measure our work.

Mayor Garcetti's goals for LA are:
1. Grow the economy
2. Be the safest big city in America
3. Fix basic services
Even though he has held Town Hall meetings in every part of LA, the concerns of the citizens are the same and overall people want good government, government that works.

Mayor Garcetti has 4 deputy mayors one for each of his priority areas:
1. Safe city
2. Prosperous city, people can create jobs, streamline beauracracy
3, Livable city, what's your exp. like, traffics, great streets program
4. Well run city
Everyone on the room, felt inspired and jumped to their feet in applause when Mayor Garcetti ended his presentation by saying,
"Let's make LA the best managed big city in America."
Hashtag for tweeting #BudgetTownHall