The discussion kicked off with a PowerPoint presentation by Eric Bruins of the LA County Bicycle Coalition.  For the stretch between Santa Monica and Pico, Bruins pitched a creative proposal involving floating bike lanes as an alternative to the city’s proposal.  A city representative who was present said the city was prepared to support the LACBC proposal and noted such a design has been implemented in other locations.  The design preserves street parking on both sides during non-peak hours with one travel lane in each direction.  During morning peak, it allows for two travel lanes northbound and a parking lane southbound; during evening peak, two travel lanes southbound and a parking lane northbound. 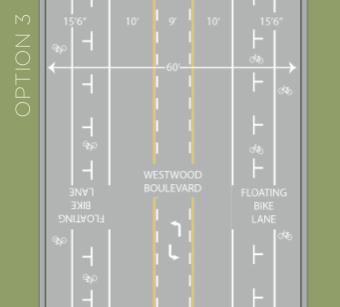 Bruins developed a number of arguments in favor of bike lanes generally:  health and safety; tendency of bikers to patronize local businesses; community ambiance.  He emphasized the importance of Westwood Blvd as a biking corridor between Palms and UCLA, with the Expo Line to figure in soon.

A few Council members spoke favorably, but the weight of the feeling on the Council seemed negative.  The Council President ended the discussion with an ominous speech about all the unknowns surrounding the Expo Line and further Westside development.

For details on implementation of the 2010 Bike Plan, see the LADOT Bike Blog:  http://ladotbikeblog.wordpress.com/bpit/

The use of classic Collectivist action and using the word "cadre" brought that comment not the fact that bikes are involved although the push for bikes is integral to the Agenda 21 model for urban densification. I'm not baffled in a false sense or in fact. I'm very clear about who I'm dealing with. Why you bike people keep trying to equate L.A with most major cities in the world is, well baffling. If you can't see that our city is pretty unique, try commuting on a bike from Granada Hills to LAX every day for a few years. Maybe some freeway therapy will inform you.

Also once again you have distracted from the original debate. Lanes up Westwood are impractical and there are too many practical alternative routes, ie side streets. Taking offense is not going to change that arguement in your favor.

BTW you're the second person to misrepresent my comments. What is it with you people? It's almost impossible to have an honest debate with you.

Calling someone you don't agree with comrad because they ride a bike is not logical or reasoned.Spare me your false sense of bafflement.In case you haven't figured it out bikes can be a serious mode of transportation.Just take a look at most major cities around the world.

No extra lanes or accomodation is needed for motorcycles. They don't impede traffic. They are licensed and insured like every other motor vehicle. They can be a hobby but they can also be a serious mode of transportation. Nobody is suggesting "restricting" bicycles. There's no restrictions on bikes now. They can ride anywhere they like. I wouldn't recommend keeping them off any street. I just object to taking lanes away where the street in question is already too narrow. I don't mind lanes on broader streets or less busy side streets.

As for idiots on motorcycles, yes they can be dangerous, but then so can idiots in cars, boats and airplanes. Have you ever done any reading about fatalities from idiots driving a horse and buggy through history?  You haven't made any points in favor of bike lanes here.

How does having a logical, reasoned opinion make one judge and jury? Plese explain.

It's also not uncommon to encounter irresponsible or downright dangerous motorcycle riders on the streets here so I suggest we really restrict them also.After all some idiot with a bike with a motor on it can do far worse damage than one without.

Riding a motorcycle could very well be considered a hobby by many.You seem to be judge and jury here.

I ride a motorcycle in the Santa Monica Mountains. It's not uncommon to come around an uphill 40 mph blind turn and find two or three bikes riding side by side at walking speed. I just go around them happy that I had the reflexes to avoid them. If you don't ride responsibly people will react. The same applies to driving with a cell phone to your ear. Bikers are not immune to human nature. They have no reason to be especially offended. Blank happens, get over it. It's going to happen a lot more on Westwood Bl if you get your bike lanes.

BTW why not a lane for roller blades and joggers if we're going to accommodate people's hobbies?  The popularity of archery is exploding due to Hollywood movies. I'm a long time archer. Should we make public golf courses make space on fairways for archers? Golf evolved from the sport of roving archery. There's an ancient tradition. Of course this is an absurd idea, far too dangerous. Archers should use the rare designated ranges. Bikers should fit in where they can on wide streets with room for them and on side streets. To offer special lanes where they won't fit is to encourage more bikers to create more problems.

In my experience as a biker, expressions of encouragement from motorists are far more frequent than expressions of hostility.  Even so, the latter occur all too frequently, and what Dylan describes happens to most of us at some point.

An emotional and tragic story, Dylan. Is it based on an actual event? If so some further details to flesh it out would be helpful. What were the exact circumstances involved. Was there any reason other than a person on a bike that so enraged the alleged motorist? If I seem skeptical about your story, I would refer you back to your mis-representation of my original comments about bike lanes. Taking someone's comments and altering them to suit your argument is dishonest. I called you on this and you've failed to respond much less apologize. This puts anything further you have to offer in a poor light.

Patrick Antonian on How Graffiti Inspired Him to Become a Rapper

Christian rapper Prodigal Son on Growing Up in Elysian Park