Shakespeare, Paris Hilton and the Kardashians: Twelfth Night at The Pico Playhouse in Rancho Park

The Mechanicals Theater Group's self-described irreverent production of Shakespeare's Twelth Night is onstage now at the Pico Playhouse through December 18. 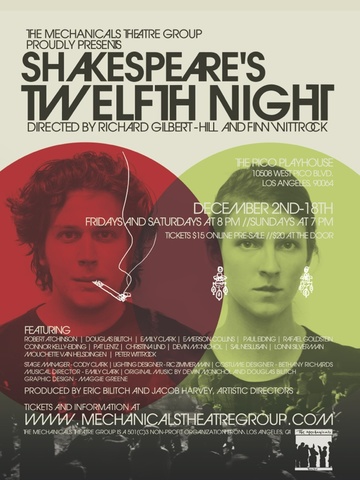 It is not often you hear Kim Kardashian and Paris Hilton associated with Shakepeare. But the play's co-director Finn Witrock, writing in the LA Stage Times, describes some Los Angeles-centered liberties being taken to  make this Pico Blvd.-production resonate with local audiences. .

"My co-director Richard Gilbert-Hill and I have been fascinated with the possibility of injecting our Twelfth Night with the same strain of immediacy for our 21st-century Los Angelenos," he writes.  "For instance, the notion of bloodline nobility seems outdated to us as a concept, unless we put it in the context of the Hiltons or the Kardashians — in which case we are even more familiar with our royal families than the Elizabethans were, for we’ve been watching them in our living rooms.

Speaking of living rooms, the Pico Playhouse is an intimate local theater that is a great place to see plays right here in our neighborhood at 10508 Pico Blvd.

You can read more about the inventive production at Los Angeles Broadway World. The show runs Fridays and Saturday's at 8:00 and Sundays at 7:00 through December 18.

Tickets are $16 at The Mechanicals Theater Group's website or for $20 at the door.