Homes in Rancho Park don't just have curb appeal, they have star power. That is the word from Stevie Nelson, a location scout for the show House, who showed up on my doorstep recently looking for an "East Coast" style home in the area to use for a scene for the hit Fox show. Talk about opportunity knocking! Alas, the show's producers eventually decided to use a soundstage instead. But as Nelson clicked photos of my home to show to the prodcution team she explained that Rancho Park and Cheviot Hills are choice locations for filming because of their proximity to studios and the wide varieties of architectural styles in the neighborhoods. 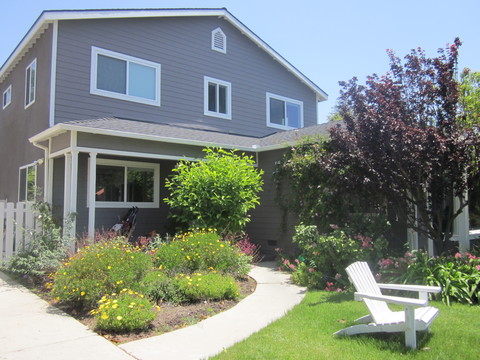 "Many Rancho Park and Cheviot Hills homes can be anywhere homes," said Nelson. "We can stay close to the lot but pretend we are anywhere in the country. That is what makes this area so great for filming."

The productions pay homeowners a location use fee and get clearances from neighbors and the city. To those who argue that filming is a neighborhood nuisance, Nelson asks them to consider how many people the tv and film production industry employs and the cost to neighborhoods and the city as a whole if production shifted elsewhere. Already many shows choose to film outside of California in places like New Mexico, Detroit and Canada.

I'd be interested to hear if anyone here has had their home or street "discovered." Was it worth it? Can you name any movies or shows that have used Rancho Park as a backdrop?

Comment by Alexandra "Petie" Alznauer on October 20, 2011 at 6:09pm
I have this vague memory of the house next door to us on Ayres being used as a location for exterior shots by a film or TV crew back in the late 1960's.  The house at that time was just one of the original, unremodeled 1940's models between Westwood and Overland.

Comment by John A. Abel on September 27, 2011 at 9:41pm
Forgot about the TP video.I'm right up the street from the carwash and they also used it for something with Super Dave one night.Moonlighting several times  used Beverly Glen starting at the carwash and heading towards Olympic for driving scenes.St. Timohy has been used also but not sure for what movie/show.

This is not a movie  or tv show but the Tom Petty video for "Free Fallin" was filmed at the Westside Pavillion.

Comment by John A. Abel on September 24, 2011 at 3:40pm
The Three Stooges short"Three Little Beers" 1935 was filmed at Rancho Park golfcourse but you can see hills in the background so it was before the city took over the course from private hands and levelled the hills in the resign of the course.

Doris Day's movie "Move Over Darling" (1963) filmed the Doris in the convertible going through the car wash at Crown Carwash at Pico & Beverly Glen.  Great scenes of Pico, Beverly Glen, the alley and, of course, the carwash.

The front of the Westside Pavillion on Pico was shown in the movie "Clueless".

Comment by John A. Abel on September 22, 2011 at 8:20pm
I might add that Fox twice used a condo across the street for Prison Break and the only neighbor happy with it was the guy who owned the Condo.Loud and noisy with lots of shouting starting around 6.a.m. as the trucks were unloaded and more of the same when finished and taking up blocks for parking.If thse studio folks hink it's so great why don't they film on their block?