The Expo Construction Authority issued a press release today stating that major construction has begun on Phase Two of the Expo Line with the start of work on the bridge at Centinela Ave., a structure the authority estimates will take a year to complete. 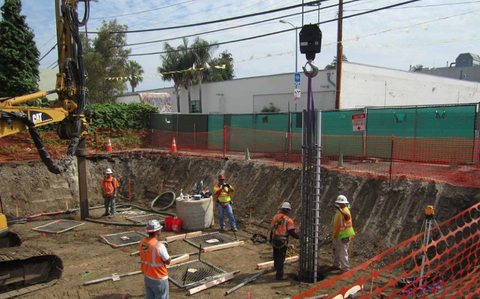 There are currently 16 street level crossings and 11 more that go above grade (see them all here). However as recently reported on Streetsblog, the California Public Utilities Commision has ordered a re-review of two of the phase two crossings, based on a complaint filed by Neighbors for Smart Rail.

"Despite warnings from advocates, Expo failed to study the I-405 grade-separated crossing and the Palms Park pedestrian-bridge crossing," writes Streetsblog.  "At the least, it seems likely that the Expo Construction Authority will have to submit an addendum to the existing environmental reports."

A prehearing conference on that matter is set for Oct 5 in San Francisco. The site also reported that Neighbors for Smart Rail has also asked the California Supreme Court to overturn the appeals courts decision to uphold the environmental impact reports that guided development  for the line. No word yet whether the court will take the case.

Here in Rancho Park, the Expo Authority release also notes that major construction will soon begin on several key structures related to the rail line, including bridges at Motor Ave. and Sepulveda Blvd. and the parking structure at Sepulveda.

Anyone with questions regarding construction activities can contact the Expo hotline at (213) 922-EXPO (3976) or visit www.buildexpo.org.